INSPIRED DESSERTS, FROM THE HEART

Growing up, our founder, Chef Boyd Kerr, spent much of his childhood in his family’s southern California avocado groves. He’d take the ripe fruits home where his father taught him to make fresh guacamole — one of his first recipes! In the summers, he and his mother would venture off to England where they’d cook traditional English fare with his Nana. What an introduction around the kitchen!

As Chef Boyd’s culinary interests grew, he sought out new places to hone his craft. He took a job at a wine and cheese deli at 13 where he learned knife skills, about meats and cheeses, and a lot about how to do dishes! He ran his own kitchen at the impressive age of 19. After 10 years in the biz, he headed to San Francisco for formal training at the CCA.

He was on the chef’s fast track following graduation, taking any opportunity, anywhere in the country he could. He loved mentoring and teaching in corporate life. He was a baker/pastry chef, Executive Chef, Corporate Chef, and developed recipes and menus across the US.

He returned home to San Diego and opened an eclectic fusion restaurant of his own. Something called him to pull all of that experience together and express himself through the art of desserts… and Tasty Expressions came to be in January 2020.

What makes him most happy? Not awards, not accolades (he humbly won’t brag about them, but we’ll tell you he’s received many). “It’s pleasing people when they eat your food and seeing the satisfaction on their faces!” 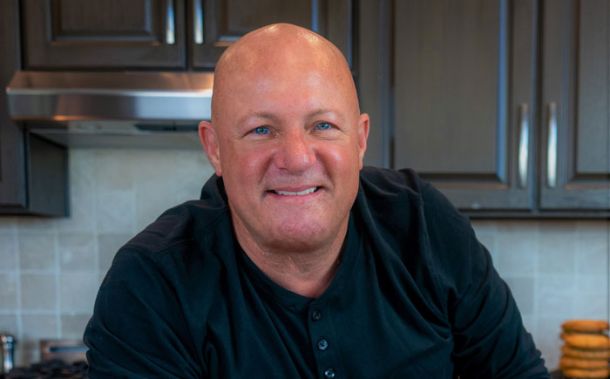 FROM OUR CHEF’S KITCHEN

You want to see me light up? Give me a bunch of ingredients! From the time I was very young, I always knew I’d be baking for people for a living. It’s what I love to do best! Tasty Expressions is a culmination of my favorite family treats and some of the most popular restaurant recipes I’ve developed over years and years. I hope you enjoy them as much as I do!
— Chef Boyd Kerr
Keep Connected
Stay up to date by subscribing to our newsletter.